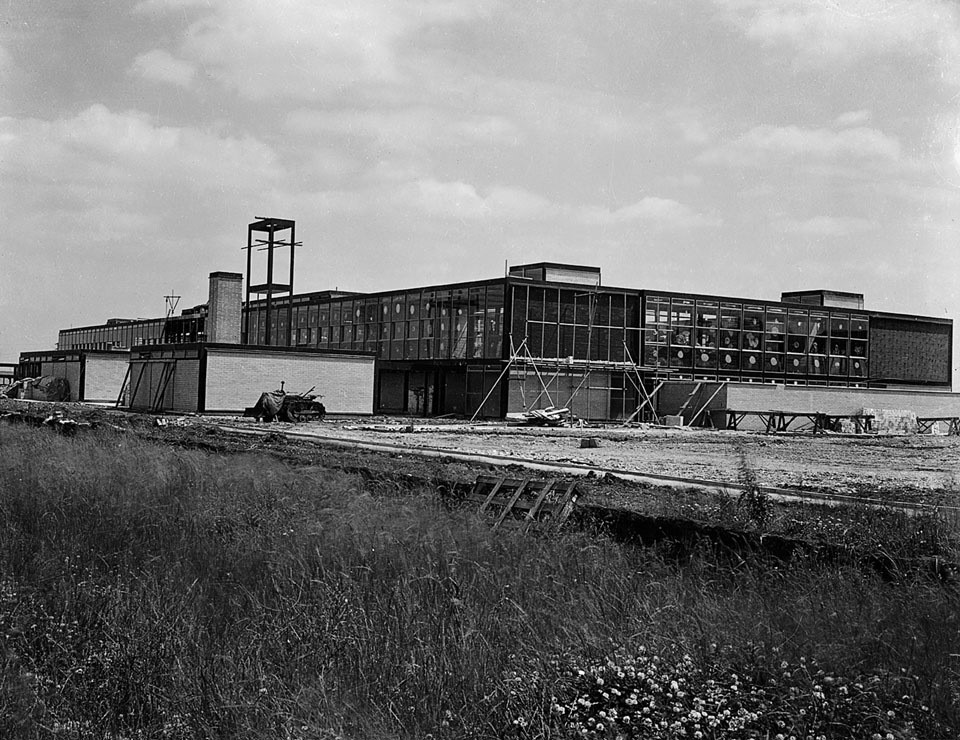 Smithdon High School under construction in 1954. > The water tank is yet to be added

Interestingly, Smithdon stood out from many of the schools which were built at that time. It was at the centre of a national competition for architecture. The competition was won by an up and coming married couple, the Smithsons, who designed the school in their “New Brutalism” style. It was one of their first designs and its perceived excellence helped to found a very successful career in architecture for them. It remains a significant building to this day and has Grade 2 listed status.

In 1980, the school became a comprehensive school and changed its name to Smithdon High School. Many associate the name with the architects of the school, the Smithson’s, but this is not the case. The name Smithdon comes from the administrative division of a larger region, dating back to before Norman times. The Smithdon Hundred, was a collection of parishes around Hunstanton (see map below). Although the origin of the word Hundred is lost; it is thought to represent 100 Hides, with one Hide being the amount of land required to support one family. 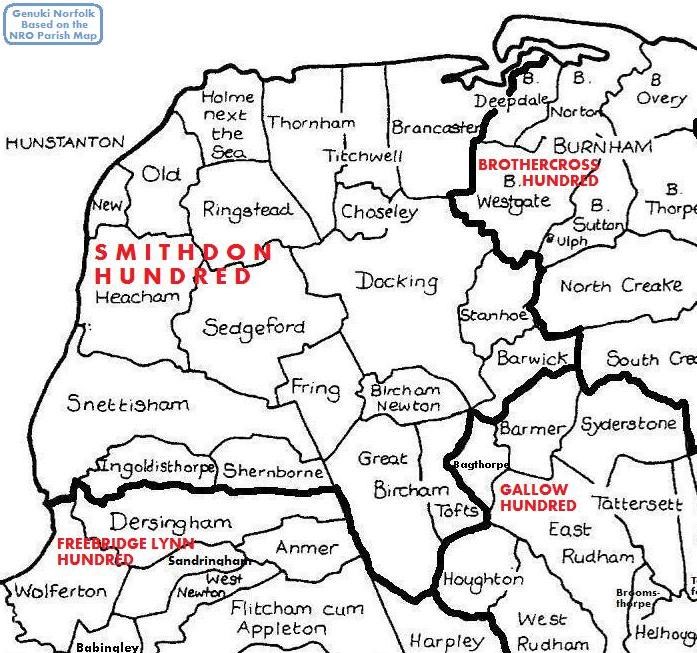 A map of the "Smithdon Hundred" placing Smithdon High School at the centre of the community.

Below is an extract from White’s History, Gazetteer, and Directory of Norfolk 1845.

The Smithdon Hundred is a fine agricultural district, forming the most north-western division of Norfolk and bounded on the north and west by the Ocean and the Wash.

The surface is in many places picturesquely undulated, and the soil being mostly a deep rich clay, is naturally fertile and was formerly in large open fields, most of which have been enclosed since 1761.

The lands near the shore are chiefly salt marshes, which are often inundated at spring tides; and at other periods, a strong gale from the north-west has sometimes brought in the water with such force and rapidity, that whole flocks of sheep and herds of cattle have been lost.

By naming the school after the Smithdon Hundred, we can see that it really does bury its roots strongly into that “deep rich clay” and the community that now thrives upon it. Students attending Smithdon High School today, have the opportunity to study the enclosure that took place here and the specific landscape which makes our area so special and unique in their History and Geography lessons.

In 2000, investment continued at Smithdon, with the construction of two new buildings – one of which now incorporates the library and classrooms; the other is a large, purpose-built technology area.

Always looking to improve the school, 2020 has also seen significant investment with new roofs across the school. The Sports Hall has had a replacement modern sprung floor. Whilst more classrooms in Art, Food Technology and ICT (amongst others) have had a complete refurbishment, bringing them right up to twenty-first century standards. 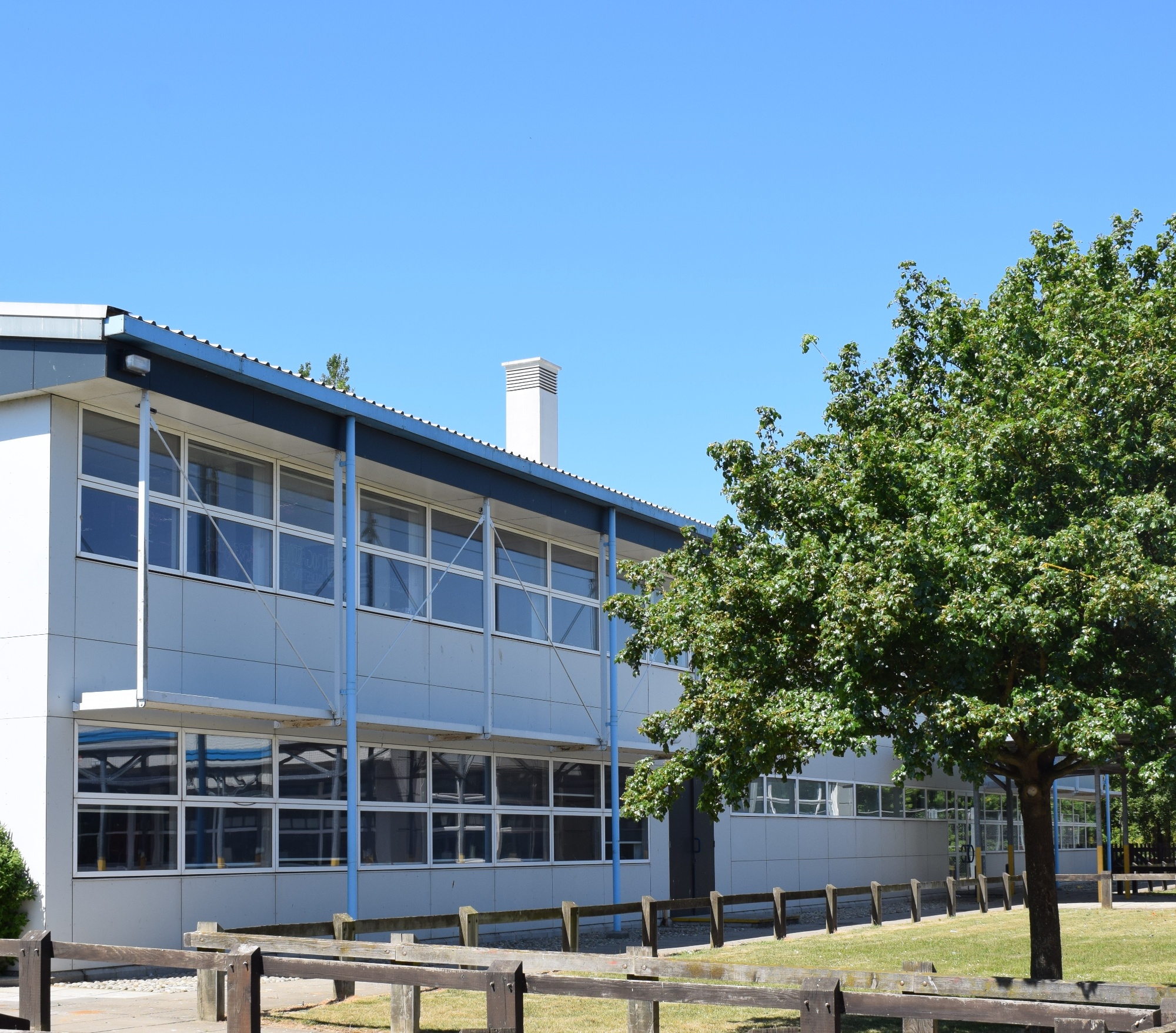 The Shaw Building added to the school in 2000 alongside the Sports Hall and Technology block. 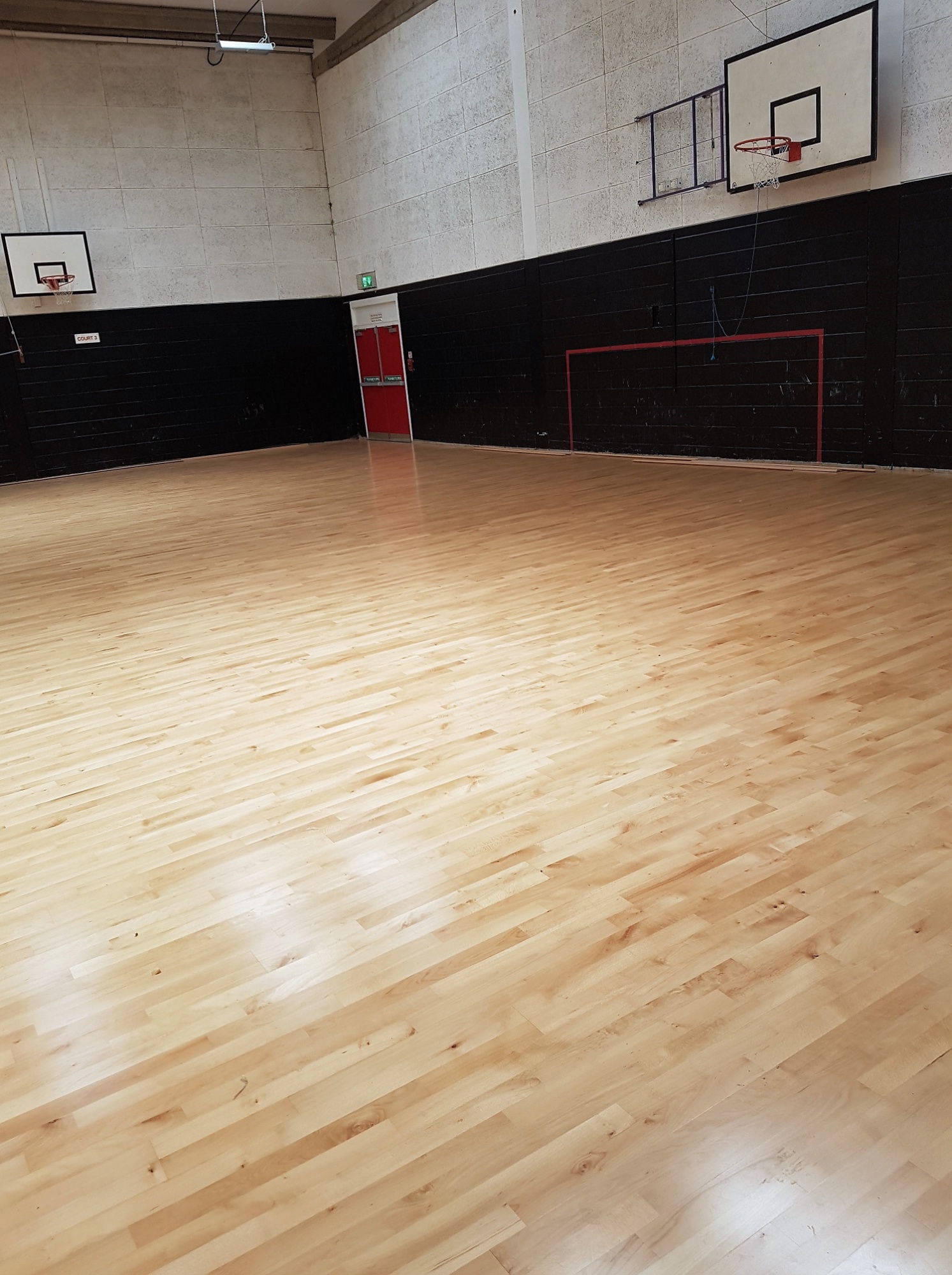 The Sports Hall receives a new sprung floor in 2020 following new roofs and lights in 2019. 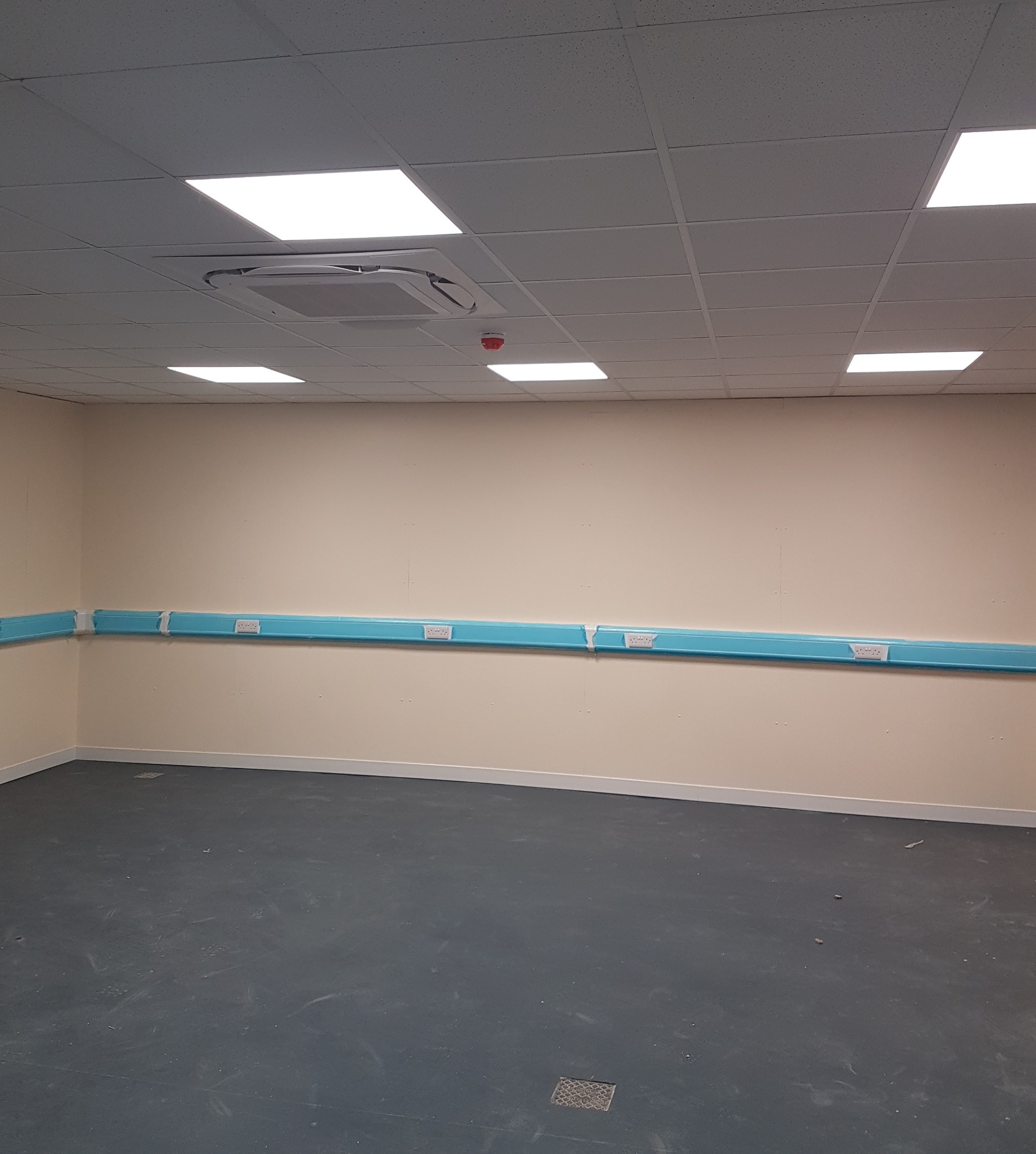 One of the Art Rooms undergoing refurbishment in 2020. Other Art rooms, Food Technology rooms and ICT rooms were also refurbished in 2020.

Today Smithdon is mirroring the integrity of its rich and successful past in more than just the buildings.

The uniform, for example, was introduced into the school in the late 1950s when the headteacher was frustrated with:
“loud T shirts with newly affixed transfers of handsome film stars and monosyllabic phrases, brightly coloured cardigans and dresses of all varieties, high heeled shoes and ghastly fluorescent socks”. 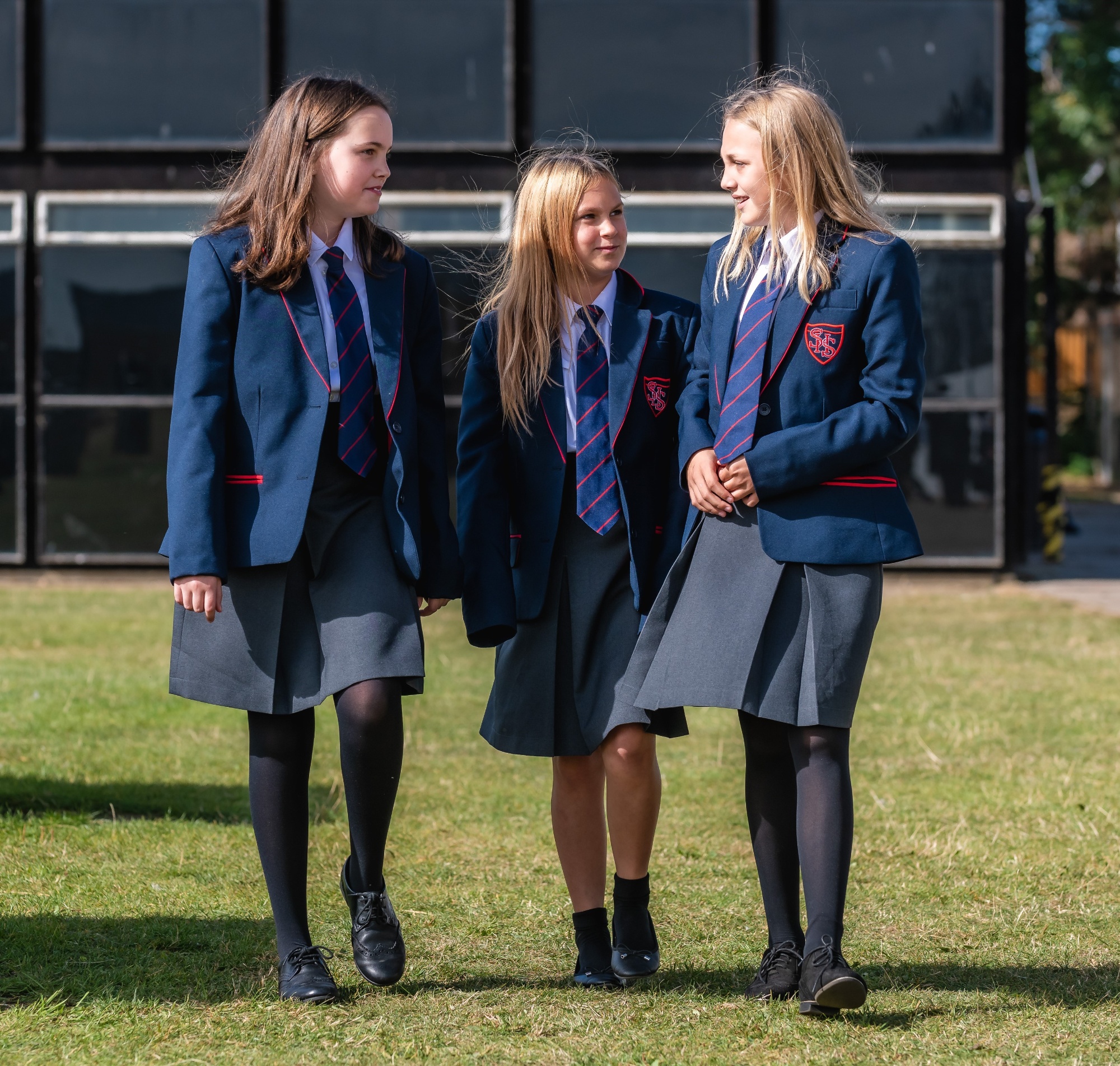 The ‘new’ uniform encompassed a navy blazer with red trim and grey trousers for male and grey skirts for female students.

In a revamp of the uniform in 2019 it was felt that the school should return to its roots and replace the black blazer and trousers, with a uniform similar to the 1950s… and today’s students look great in the new school uniform, as you can see here. 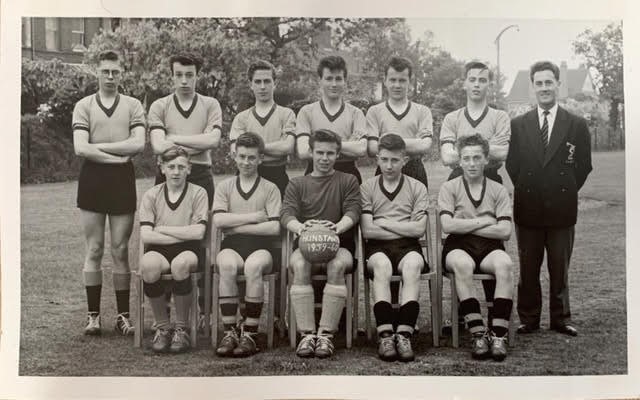 As well as a rich heritage of architecture, Smithdon was known as providing a rich curriculum for its students. Sport was central to school life, with many teams successfully competing across the county. Each year a school play would be performed in the school hall, students learnt musical instruments and sang in choirs. 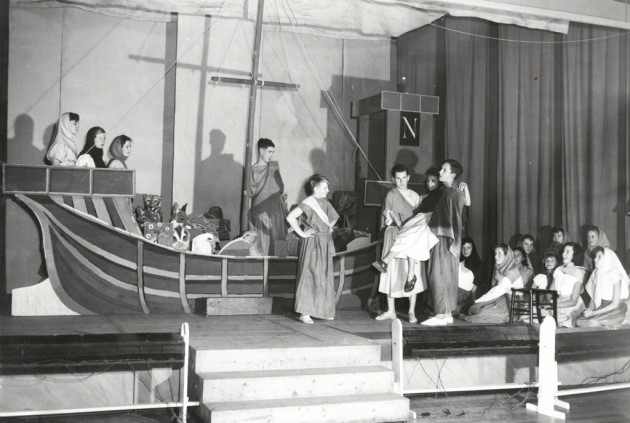 An image from Noyes Fludde by Benjamin Britten, remembered by Mr Paul Griffiths.

There was also a desire to take children out of their comfort zone and the school ran trips in the UK and abroad. After discovering some fantastic pictures in the records office during the refurbishment of the school and the story appearing in the local press, more detail was provided by former students and staff of Smithdon.

The pictures of the skiing trip and associated account is particularly heart-warming. Below is an account from Mr Paul Longthorne.

I thank  Mr Chris Holt  who has previously written about the trip and quote from his written memories:

'None will forget Hunstanton Secondary School’s first trip abroad in 1962, to go skiing in Switzerland. Mr Gee took it upon himself to get us some early ski practice before reaching the slopes of the Alps. The skis were two six foot planks of wood with upturned metal plates screwed to the front. Onto these were nailed the biggest pair of hob nailed boots you ever did see (no quick release mechanism). Once strapped and trapped into these, we were subjected to practising various ski techniques from the standing position. That year it snowed and with ever increasing trepidation we were subjected to moving. With two broom handles for sticks and with long ropes attached to the front of our skis, gangs of children towed us at speed, ignoring pleas to stop, as we all eventually lost balance.

How we never ended up with broken limbs is still a mystery.' 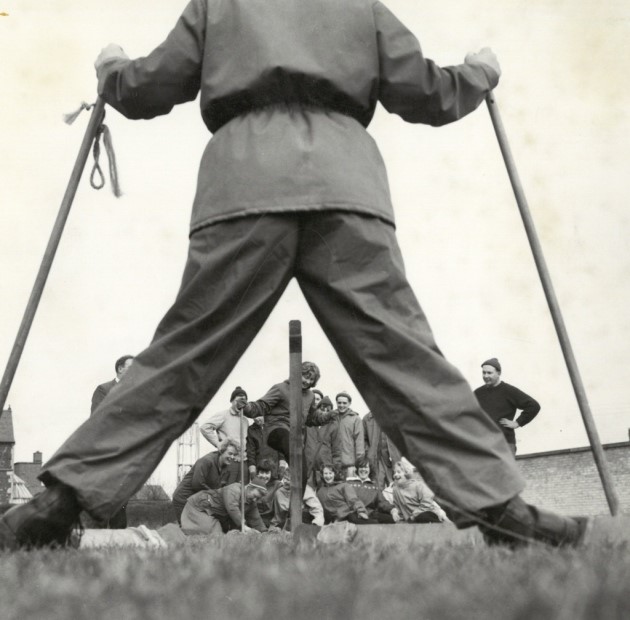 Practising the snow plough in 1962, with the absence of any snow – or hills for that matter 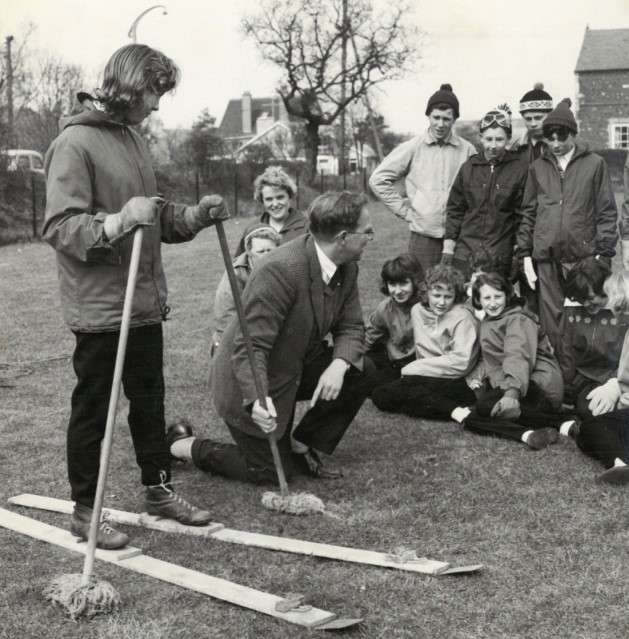 Mr Gee instructing students, before the trip to Switzerland in 1962, on the intricacies of skiing using planks of wood for skis and mops for ski sticks!

Alongside pictures from the 1950s, there are also pictures taken a whole generation later in the 1980s. The local press article enabled several events to be remembered and fondly looked back on. 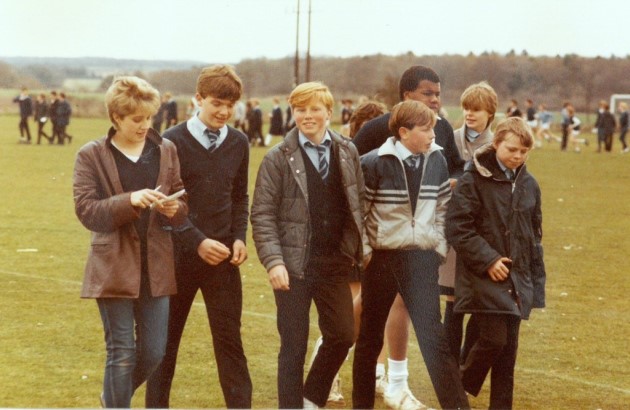 Sharon Langford (as was) recognised herself in this picture from 1984, commenting that "I never knew these pictures had been taken. School years were great."

Another student, Angela Townley (now Peek), who was also in the picture affectionately recounted some excellent details of that day back in 1984: 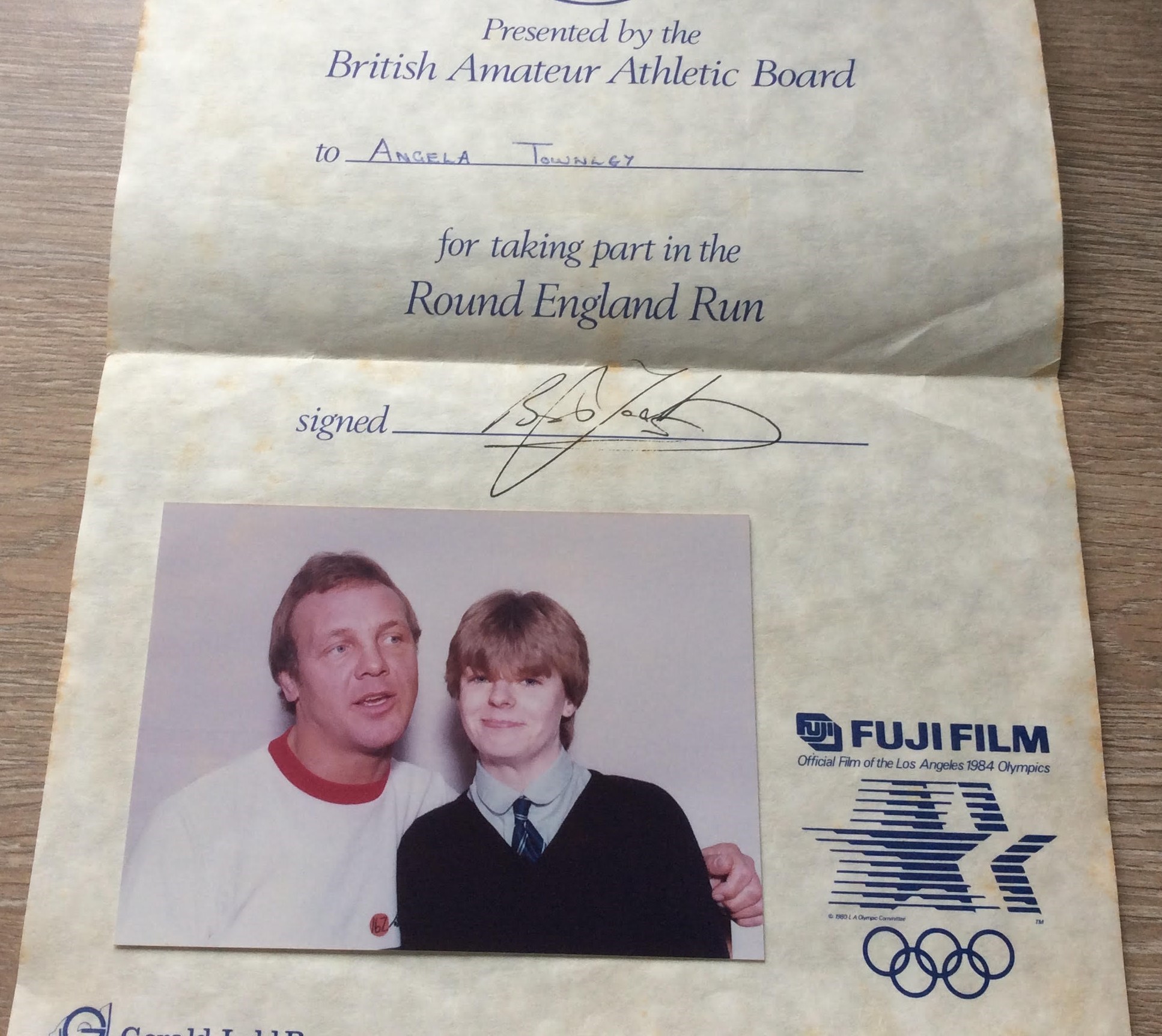 Figure 1 The certificate and photo of Brian Jacks all students received after the sports event in 1984.

“The photo was taken during a sponsored walk, around the school playing field, in aid of a sports charity. I couldn’t think of the year it was taken straight away, but I remembered we all had our photo taken with Brian Jacks, who was the Judo Olympic champion at the time. I can remember it all clearly now, lining up in the main hall, while we all sat next to him, one by one, having our pictures taken! I had a look through all my old stuff I have kept over the years, and actually found my signed certificate, with the photo attached to the bottom! It is printed on the bottom, that it was 1984, which was my last year at Smithdon High School."

The local newspaper article in the EDP, July 2020 can be found here: https://www.edp24.co.uk/news/education/old-pictures-of-smithdon-high-school-in-hunstanton-1-6758169

Smithdon High School has a rich past, where students and staff enjoyed the sense of community, belonging and all that the school had to offer. Responses to nostalgic newspaper articles from former members of the Smithdon High School community reinforce this as former students reflected on their school days with fond memories of the exciting adventures that they shared.

Smithdon wants to continue to be that strong school community and continue to develop those connections with both the community in Hunstanton and the wider “Smithdon Hundred”.

Already the choir tours the residential homes at Christmas; Reading Rangers support children in the local primary schools; the Carol Concert at Christmas is an established event at St Edmund’s Church, Hunstanton, and the school continues to raise money for local charities, such as the local food bank and the Lifeboats.

Schools must offer opportunities for students outside of the classroom, as is clear from those the early days of Smithdon and we would not want this generation to miss out on those same opportunities and experiences:

And more is planned…

School trips are encouraged and the expectation is that every student will go on at least one trip during their time at Smithdon, although there are opportunities to experience many more than just one. A school activities week in the summer contributes to this ideal, alongside the Duke of Edinburgh’s Award Scheme and academic trips organised by the English, humanities and other departments, that take place frequently throughout the school year.

Just like 1984 and the visit of Brian Jacks, the school continues to encourage outside speakers and other organisations into school to widen the horizons of our students. Students have the opportunity to see performances of the works of Shakespeare and other playwrights within school, whilst those studying languages will soon be treated to plays in either French or German. All students have the opportunity to listen to and ask questions of entrepreneurs, adventurers, authors and leading sportsmen during their time at Smithdon.

Students should be proud to wear the Smithdon High School uniform and be proud of what everything they achieve at school. We, at Smithdon, believe that every student has talent and ability which need to be identified, encouraged, fostered and recognised. Rewards assemblies, speech days and prize giving events are regular features of the calendar, where the whole school and community can come together to celebrate the success of our young people.

Architecture has been central to Smithdon even before the first foundation stone was laid. However, for the school to truly accommodate pupils in the Twenty-First Century, it must continue to develop its buildings and site to ensure that pupils continue to get a first-rate experience. There has been much building work and refurbishment in the past few years; this will need to continue until Smithdon can match the very best in the country.

Alongside the buildings, Smithdon has some truly amazing and outstanding teachers and support staff. Smithdon should be seen as an exciting place to work; the place where the very best, specialist teachers see their careers developing through outstanding resources and training and the opportunity to do what they do best – teach. The school continues to try to attract the very best staff.

Schools are fundamentally about learning. Standards have to be high; results outstanding. Smithdon has improved its results over the past few years and the school will always strive to continue to improve on these. The curriculum is modern and will start preparing students, not only for their GCSEs, but for lifelong learning from the day they join us in Year 7 (or later). We expect students to know so much by the time they leave and to succeed well beyond their expectations.

Smithdon High School is aware of its rich past and heritage. Today’s Smithdon High School expects high standards in both behaviour and academic excellence. It believes – and will continue to believe – that its curriculum must match the needs of the modern world and that students will leave with the qualifications, knowledge and skills that they need to progress in an increasingly competitive and complex environment. They will also have had a memorable experience, including: excellent school trips, strong speakers, opportunities to show integrity by being kind and thinking of others, alongside a wealth of life-enhancing activities. All this will help to shape their character and provide them with the broad foundation needed to build upon whatever their future beholds.